It has been estimated that the proven reserves of natural gas (methane) in the U.S. could, on an energy basis, sustain the transportation sector of this country for the next 50 years. However, the low energy density of methane necessitates its upgrading to CNG, LNG, or gasoline (through the FT process) for integration with current infrastructure. These steps are prohibitively expensive, so we are investigating biological processes for the low-cost conversion of methane to drop-in fuels. With funding from ARPA-E’s REMOTE (Reducing Emissions using Methanotrophic Organisms for Transportation Energy) program, and in collaboration with Peter Girguis (Harvard) and Maria Flytzani-Stephanopoulos (Tufts) we are pursuing several strategies for the conversion of methane to liquid fuel molecules with much higher energy density.

The critical step in the conversion is the initial oxidation and activation of methane. Because of the stability of this molecule, this is a difficult reaction. Organisms that grow aerobically on methane use the enzyme Methane Monooxygenase (MMO) to catalyze the oxidation of methane to methanol. However, this reaction requires the input of energy in the form of NADH, reducing the amount of energy captured from methane. Similarly, catalytic processes for methane oxidation require oxidants like H2O2, which present difficulties to implement at industrial scale. To address these issues, we are investigating the above paths as well as alternative methane oxidizing paths such as the enzyme, Methyl Coenzyme M Reductase (MCR) that catalyzes the oxidation of methane without the input of electrons. Our work in this area is done in collaboration with Harvard, and is focused mostly on understanding the assembly of MCR along with its cofactors and its post-translational modifications, to inform the heterologous expression of the enzyme in an industrial microbe. At the same time, the Tufts group is investigating atomically dispersed nanoparticle catalysts for the selective oxidation of methane to methanol under ambient conditions without the use of a reductant. 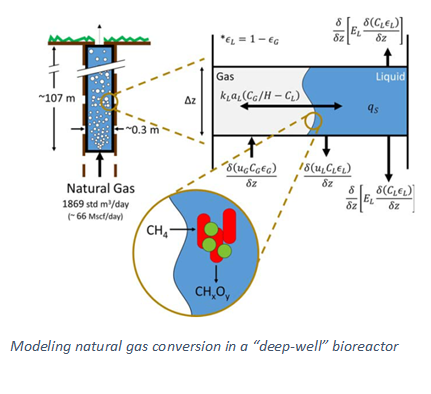 The aim of both these project arms is the conversion of methane to C1 compound at the methyl oxidation level. Next, this molecule has to be converted into a fuel. We are investigating the acetogens C. ljungdahlii and M. thermoacetica because of their ability to grow very efficiently on C1 compounds using the Wood-Lungdahl pathway. M. thermoacetica grows natively on methanol, but the basic genetic tools that would be needed to engineer a downstream pathway are in their infancy, so we are trying to understand the fundamental biochemistry and genetics of this metabolism using -omics and stable isotope tracer experiments, so we can transfer the pathway into C. ljungdhalii, for which there are a number of synthetic biology tools but which does not natively grow on methanol. We are also exploring transferring methanol assimilation into E. coli, a workhorse of the metabolic engineering community, in an approach termed ‘synthetic methylotrophy’.

While pursuing all these goals experimentally, we are also developing better techno-economic models of a natural gas conversion process. The ultimate aim is to use the data collected from the various enzymes, catalysts and pathways being developed, along with these models, to inform the deployment of a Bio-GTL process for converting methane to a liquid fuel.