A general ambition in the Stephanopoulos lab at MIT is the biological production of renewable chemicals from plant-derived carbohydrates with the goal of developing sustainable technologies to replace traditional, fossil fuel-based processes. As depicted in the figure below, traditional processes typically begin with fossil fuels as the raw materials and involve one or multiple chemical steps. As there are several well-publicized issues surrounding fossil fuels, newer technologies are making use of renewable resources such as plant-derived carbohydrates. The conversion of carbohydrates into useful products is still being developed; presently, well-established biological processes are being employed to produce bio-based intermediates which can then be converted into the final product through a chemical process. Chemical processes are generally energy-intensive, so, as technologies mature and advance, we envision that future processes will comprise a single-step biological process. In contributing toward this end, our research entails the metabolic engineering of microorganisms followed by the cultivation of these strains in fermentation processes. 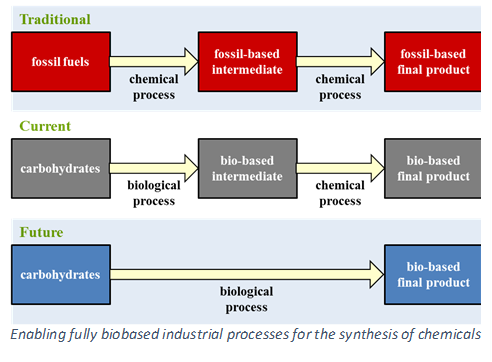 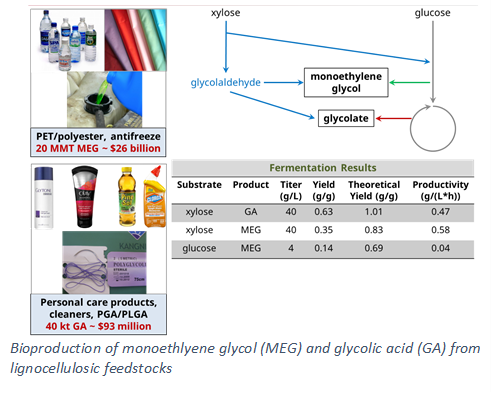 In one ongoing project, we are targeting the production of small oxygenated compounds that can be used as precursors to polymers. Monoethylene glycol (MEG) is one precursor to polyethylene terephthalate (PET), which is utilized in food and beverage containers and is the material that constitutes polyester fabric. MEG is additionally used as the primary ingredient in many automotive antifreezes and in several smaller applications. The annual production of MEG is roughly 20 million metric tons, corresponding to a market of approximately $26 billion. Glycolic acid (GA) has applications in personal care products, cleaners, and in dyeing and tanning. GA also serves as a precursor to biodegradable polymers, including polyglycolic acid (PGA) and poly (lactic-co-glycolic acid) (PLGA); these polymers can be utilized for medical devices such as sutures. Furthermore, because PGA is biodegradable and exhibits good barrier properties, it can potentially be used for food and beverage containers, complementing, and possibly even supplanting, PET. The current production and market of GA are relatively small, 40 thousand tons and $93 million, respectively. However, the market is projected to grow by ~10% CAGR, even before considering new PGA applications.

The basis of our technology is a set of novel metabolic pathways by which a pentose, preferentially xylose, is cleaved into a two-carbon intermediate and a three-carbon intermediate, followed by the conversion of each intermediate into MEG or GA. Engineering these pathways into E. coli enabled the strain to produce GA from xylose at the highest reported yield, 0.63 g/g; a separate engineered strain achieved the greatest reported titer for MEG, 40 g/L. We also demonstrated the production of MEG from glucose. Thus, the technology effects the direct production of renewable GA and MEG from plant-derived carbohydrates, a more sustainable and environmentally-friendly process than current industrial methods. The other important aspect of this research is that the strains can make use of pentoses, an under-utilized fraction of lignocellulose. We have subsequently investigated making use of GA for polymer production and have engineered a strain that can generate poly(glycolate-co-lactate-co-3-hydroxybutyrate) in vivo. The future aims of the project are to advance the technology closer to industrial application and to explore other product compounds.